(Frankfurt am Main, 23 July 2019) Frankfurt-based Kombiverkehr KG, Europe's leading intermodal company, has brought to market another modern application for customers in the forwarding and logistics industry as part of its digitalisation strategy. As announced at this year's shareholders' meeting on 2 July 2019, the first "Train Monitor" pilot project was launched at the start of the month with the publication of real-time information in Combined Transport. The test version is the first one to be available online and can be used for all Kombiverkehr's own direct and shuttle trains to view the geographical position and current timetable deviations of all trains at selected terminals. An important milestone for the new internet application is the provision of an estimated time of pick-up (ETP): this information is important to customers as it lets them know when their transport units are expected to be ready for collection at the destination terminal. Kombiverkehr can thus be seen to be implementing the findings of the European Union-backed "ELETA" project, which focuses on predicting the estimated time of arrival (ETA) for all customers. "By doing this, we are closing one of the biggest information gaps in the intermodal supply chain and meeting our customer's calls for more transparency in intermodal transport," says managing director Armin Riedl, who is all too aware of the need for an information tool such as this.

Kombiverkehr has initially launched the train monitor for the seven national and international terminals of Köln-Eifeltor, München-Riem, Hamburg-Billwerder, Duisburg Ruhrort-Hafen DUSS, Ludwigshafen BASF, Verona Quadrante Europa and Verona Interterminal in northern Italy, which can be viewed by schedulers and other interested customers within the online application on the Kombiverkehr website. The train movement reports, including timetable deviations and ETP, are displayed for each of the seven terminals on information boards similar to the ones seen in airports and railway stations. The plan is to synchronise the system with CAT, a transport processing system developed and programmed in-house, in a subsequent development phase. This means that the display will show customers only those trains on which the transport units of the respective forwarder are actually being carried.

Our customers can obtain information on train movements throughout Europe for all of Kombiverkehr's own transport services between Germany and Sweden, Denmark, Netherlands, Belgium, France, Spain, Switzerland, Italy, Austria, Slovenia, Czech Republic and Poland and in national transport within Germany. "Kombiverkehr relies on the train movement reports provided via interfaces by the different infrastructure operators throughout the whole of Europe. The estimated times of arrival supplied by network operators and train operating companies are used by our employees in Transport Monitoring and the respective terminal operators as a basic for calculating the expected pick-up time at the destination terminal. They ensure that any deviation from the originally scheduled time is clearly displayed for customers in the new online application," says Riedl, explaining the procedure for communicating the train positions and ETP.

The new train monitor is incorporated into the protected area of the existing www.kombiverkehr.com website. Customers can use the application in day-to-day business once they have registered in the myKOMBIVERKEHR section and received clearance from Kombiverkehr. To activate the system, interested parties are asked to contact Christoph Büchner, Marketing, directly at cbuechner@kombiverkehr.de, +49 69 / 7 95 05-144. 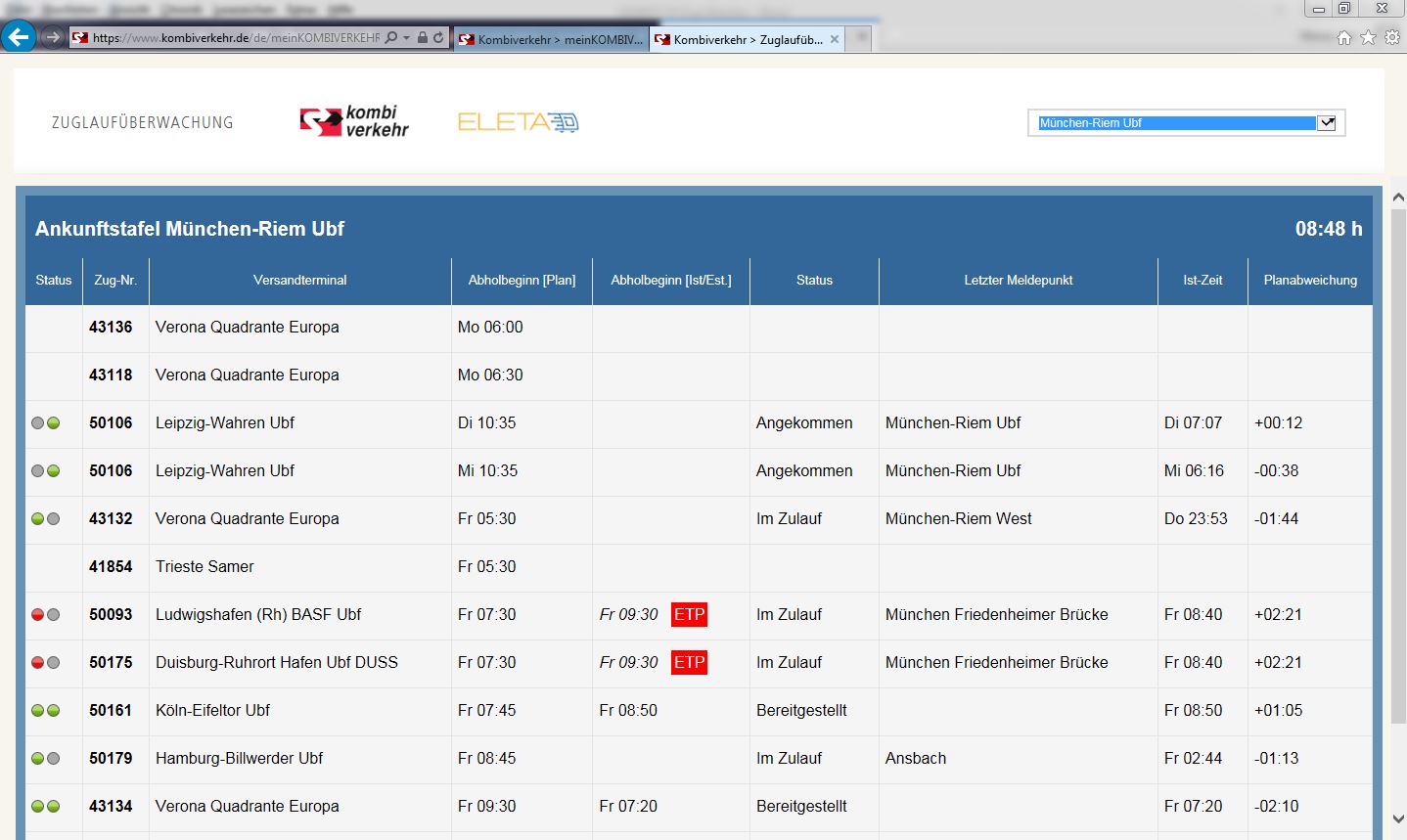 With the new online Train Monitor application, Kombiverkehr KG is providing its customers in the forwarding and logistics industry with train movement data, including the estimated time of pick-up, in a first test version.