Services
Back to overview
Previous 5 | 676 Next
Current, Press Release, The Company
Forwarders and Deutsche Bahn pulling in the same direction

Forwarders and Deutsche Bahn pulling in the same direction:
New cooperation will save around 50 million tons of CO2 by 2030

(Berlin, 29 March 2021) Over 230 forwarders are joining forces with DB Cargo AG with the aim of shifting more trucks from the motorway to the railway. The transport companies involved in Kombiverkehr KG and DB Cargo are looking to the expansion of their shared network into a true synchronised service. The handling processes are also to be made much simpler and quicker through digitalisation and automation. Deutsche Bahn and Kombiverkehr expect the improved links between freight trains and trucks to deliver a reduction of some 50 million tons of CO2 over the next ten years.

In a cooperation agreement containing a 9-point plan for Combined Transport, the two companies have set out the terms of a joint growth strategy and laid down specific steps on the path to expansion. Existing terminal locations will be joined by others, for instance, and developed to form a "Metro-Net". A synchronised timetable will network the important German and European industrial regions even more frequently, while the scheduling and billing of the intermodal transports will be organised much more digitally and less bureaucratically. This will make it even easier for logistics companies to switch to climate-friendly rail when long distances have to be covered. At the moment intermodal transport accounts for a 36 per cent share of rail freight services, according to the Federal Statistical Office. The growth potential of this type of transport is the highest in the logistics industry and is put at 150 per cent plus for the next 10 years. Combined Transport is ideal for globalised supply chains because it is not the cargo itself that is transferred from the truck directly onto a freight train, but rather standardised loading units such as containers, semitrailers and swap bodies. From the arrival terminal, a tractor unit takes the container the last few miles to the final destination by road.

Kombiverkehr is the ICE in our environmental network for freight trains. With the intelligent expansion of networks and terminals, a lot more direct services and much simpler handling processes for our customers, we are getting more traffic onto rail. The potential is enormous: we are saving the environment as much CO2 as if we took a whole coal-fired power station off the grid each year. That means Kombiverkehr is making a very important contribution to ensuring that we can keep our long-term European climate targets in the transport sector even beyond the corona crisis.

We want to shift more freight from the road onto environmentally-friendly rail. This new cooperation of road and rail fits perfectly into our rail freight transport master plan aimed at strengthening the competitiveness and innovative capacity of the sector. Forecasts indicate that the volume of freight transport in Combined Transport will climb by just under 80 per cent by 2030. We expect CO2 savings of 50 million tons from this project alone. This suggests to me that Combined Transport will play a significant part in helping us achieve our climate targets in transport.

Statement by Hermann Lanfer, Chairman of the Board of Directors of Kombiverkehr KG:

Today road and rail, forwarders and DB Cargo, are sending a strong signal: we are taking the transport transition in freight transport seriously. As Kombiverkehr, we are bringing the stakeholders around the table in order to expand our existing cooperation and give new and decisive impetus to Combined Transport. In doing so we are putting the needs of our customers centre stage. We want to make it easier and quicker for forwarders to shift transport onto rail. Only by enabling this shift, after all, will we change the modal split and turn the transport transition into reality. In concrete terms, we are strengthening the synergies in place since 2001 with a 9-point plan for strong and climate-friendly Combined Transport. We will optimise service, networking and digitalisation in a way that best allows us to attract to rail those forwarders who to date have only used the road. This will enable us to deliver a sustainable reduction in the CO2 emissions of freight transport together with DB Cargo and the BMVI.

About Kombiverkehr KG
Founded in 1969, Kombiverkehr Deutsche Gesellschaft für kombinierten Güterverkehr mbH & Co KG develops, organises and markets an international rail network in intermodal transport that offers forwarders and transport companies a combination of the advantages of road, rail and ship. Kombiverkehr provides over 170 train departures with more than 15,000 connections for the transport of freight across Europe every night. The limited partnership is owned by some 230 national and international forwarders and transport companies as well as DB Cargo AG. Headquartered in Frankfurt am Main, the company shifted a total of 858,079 million truck consignments (1.72 million TEU) from road to rail in 2020. In 2019 the 129 full-time equivalent staff achieved sales of 411 million euros.

About DB Cargo:
DB Cargo is the freight transport division of Deutsche Bahn. More than 30,000 employees bring over 3,600 trains a day through 18 countries in Europe as well as China. This annual operating output replaces up to 22 million truck journeys a year.

Cornerstones of the joint cooperation:

The collaboration was founded on the definition of a number of spheres of activity in which the companies are heavily engaged. These include new products & network expansion, joint terminal activities and digitalisation, among others. Concrete work results are to be applied on the market: 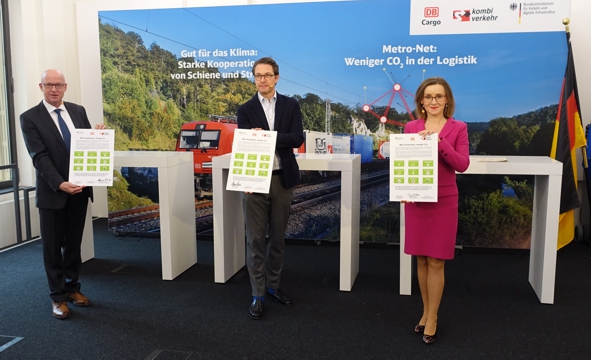 In the Federal Ministry for Transport and Digital Infrastructure, Dr. Sigrid Nikutta, DB Board Member for Freight Transport, and Hermann Lanfer, Chairman of the Board of Directors of Kombiverkehr KG, signed the cooperation agreement today in the presence of the minister, Andreas Scheuer. 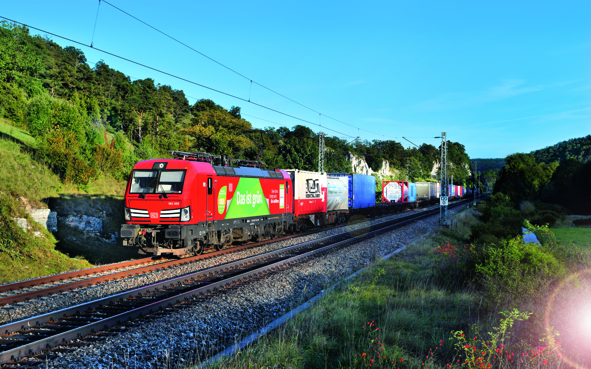 Combined Transport is to be made even more efficient with additional trains, synchronised services and the expansion of terminal locations.

DB Cargo and Kombiverkehr already connect the most important economic centres in Germany and Europe. In future, with Metro-Net, even more frequently and several times a day.