(Frankfurt/Main, 2 July 2019) Under the general conditions prevailing at present, rail will be unable to increase its share of transport from 25 to the 30 per cent by 2030 that the German government is hoping for. That was the firm view of Robert Breuhahn and Armin Riedl at today’s meeting of the partners of Kombiverkehr KG in Frankfurt, which was otherwise dominated by the company’s birthday celebrations: Kombiverkehr is celebrating 50 years of existence this year. In principle, the two managing directors of the European market leader in intermodal transport consider an annual increase in transport volumes in Combined Transport (CT) of more than ten per cent to be possible given a “product range in line with market requirements”. It was unrealistic to expect such growth rates in practice, however. Breuhahn and Riedl set out the reasons for this claim using the example of Kombiverkehr’s development of the last and the current year, making clear what has to change if rail freight transport in general and CT in particular is actually to be able to play the part in climate protection that it could do in theory.

With some 170 shuttle trains every day, in 2018 Kombiverkehr again operated the largest and densest intermodal network in Europe for switching transport from road to rail. By shifting truck consignments to rail, Kombiverkehr saved more than one million tons of carbon dioxide (CO2) emissions. However, the number of truck consignments actually transported fell 2.1 per cent on the previous year to 937,837 (just under 1.9 million TEU). “As the European market leader, we cannot escape the general trend,” Breuhahn said. “That is why the development of Kombiverkehr is a gauge of the development of the market as a whole.” According to Breuhahn, the different growth rates of individual transport axes reflect precisely where there were major problems on the railways, and where there were fewer.


Rail operators unable to meet Kombiverkehr’s demand for trains
He puts the decline of 3.6 per cent to 200,000 consignments in the German national network primarily down to the “again unsatisfactory service quality of DB Cargo.” Its punctuality rate had reached less than 70 per cent. In this situation, it was rather cynical for subsidiaries of Deutsche Bahn to profit from the poor performance of the parent company. “Yet that is exactly what happens when terminal operators rigorously demand storage fees for swap bodies or containers that are only in the terminal in the first place because the trains are not punctual.”

Breuhahn stated that quality on the railways had now deteriorated for the last six consecutive years. Alongside the many engineering works, he laid the blame at the door of rail operators for their resource problems. “There is a shortage of locomotives and train drivers, and of transshipment capacity at the terminals.” That was why even periods of high demand in 2018 could not be converted into additional CT consignments. Due to low water levels on the Rhine, for instance, trains on the Rhine railways were hopelessly overbooked in the fourth quarter of 2018. “We would have been happy to run additional trains. But the rail operators were unable to meet the demand due to the shortage of locomotives and train drivers.” Overall, Deutsche Bahn was unable to provide ten per cent of all the trains regularly ordered by Kombiverkehr.


International: double-digit growth in transport with northern Europe and Benelux
The overall picture for international transport was similar: the 738,000 consignments (1.5 million TEU) represented a 1.7 per cent drop in consignments transported compared with the previous year. That the decline was less than that recorded for domestic transport can be attributed primarily to two transport axes: with the northern European and Baltic states on the one hand, and with Benelux on the other (each up 12 per cent). According to Breuhahn, demand on both axes has continued to rise. In 2018 the products offered both via the Fixed Link and via the Baltic Sea ports of Kiel, Lübeck and Rostock were expanded.


Months of strikes result in drop for France and Spain
Kombiverkehr suffered the sharpest decline in trains to and from France and Spain. Almost one in five consignments there returned to the road – a drop of 17 per cent. The primary reason was that a number of French rail workers' unions went on strike for two days a week from April to June. As the distances involved mean that our trains to and from Spain need more than a day to cover the journey through France, they were nearly always affected by at least one of the strike days. Even once the strikes came to an end, customers only returned to rail hesitatingly. The strikes are thus having a lasting negative impact.

Consignment volumes between Germany and Italy, Kombiverkehr’s most important transport destination, fell by 3.4 per cent in 2018. At 368,000 consignments, more than one in four transport units still crosses the Alps, whether via Austria or Switzerland. “In Austrian transits especially, sectoral driving bans, convoy controls and increased Brenner tolls ought to have ensured a real boom via the Brenner Pass,” Breuhahn reckoned. “That is what we expected.” The spanner in the works came from “serious quality issues that were not just caused by the rail operators.” This was exacerbated by extensive line closures due to engineering works and storms. In August alone, the main route via the Brenner Pass was again closed for two full weeks.

“In light of the difficult general conditions, we can look back on 2018 and say that we did the very best we could in the circumstances,” Breuhahn noted. “But when you consider the very much greater possibilities that Kombiverkehr would have had with regard to climate protection, you have to say that it was another year of missed opportunities.”


2019 so far continuing the negative trend of the previous year
So far 2019 is proving to be a virtually seamless continuation of the previous year’s trends. According to Breuhahn, “Even in the first five months of the year, our transport figures have again been impacted by strikes, train accidents, a disproportionate increase in the amount of engineering works across the whole European rail network and resource problems for the rail operators.” The result was a decline in consignments of about one per cent. Over the same period Kombiverkehr had also felt the effect of economic problems in the automotive and chemicals industries, resulting in a fall in utilisation of both national and international train capacities. “Given the increase in engineering works this year – particularly on the German rail network – we anticipate that our transport volumes will at best stagnate both in the next few months and in the year as a whole.”


Urgent need for spending on modernisation and digitalisation in rail freight transport
An improvement in the quality of the rail network would, in the opinion of Armin Riedl, Breuhahn’s fellow managing director, allow a marked rise in intermodal consignments and greater climate protection. “We in Germany especially are no longer experiencing normal services with occasional engineering works; we are experiencing constant engineering works in which we have to deliver normal services.” He therefore called for “more investment aimed at ensuring continuous flows during engineering works as well as better coordination and the international and cross-network scheduling of such works.” This would enable the efficiency of rail to be increased while at the same time reducing the system costs for all companies along the intermodal transport chain.

In the face of threatened cuts in the federal transport budget, Riedl added: “The government programme on the future of rail freight transport that was to be part of the Master Plan for Rail Freight Transport, under which some 500 million euros were to be spent on both trialling and introducing innovative technologies in digitalisation, automation and vehicle technology, has unfortunately not yet been started. However, this additional spending on the modernisation and digitalisation of processes in rail freight transport is required as a matter of urgency.”


Digitalisation improves service and lowers costs
For Kombiverkehr, Riedl announced further service improvements through the digitalisation of the data flows accompanying transport. He mentioned three key areas of development. “Following the successful launch of the online booking system, we are now concentrating all our efforts on paperless agency processing. This will enable us to simplify procedures at the terminals and make life a little easier for our customers and for drivers.” The second major project was KV 4.0, which is geared to the digital exchange of all consignment data along the entire intermodal transport chain. Key milestones here had been achieved. “With our project partners we have defined the data hub that can serve as a basis for the fully digitalised exchange of data between all participants and thereby enable greater transparency and cost reductions.” To drive implementation of the platform forward quickly and effectively, a development company is to be formed shortly.


Kombiverkehr introduces real-time tracking of consignments and estimated time of pickup
Finally, Riedl promised that customers of Kombiverkehr would shortly be able both to track the location of their consignments on rail in real time online as well as establish the estimated time of pickup (ETP) in the destination station. “That is precisely what is at the core of our Train Monitor pilot project, in which the first trains have been running since last week and that we are presenting to the public for the first time at the partners’ meeting. It enables us to close a gap and complete the intermodal information chain just as our customers want.”

Regarding the route price reduction introduced at the end of 2018, Riedl noted that this did not make up for the existing discrimination against rail transport. “Compared with the route price reduction, gas trucks, for instance, receive a subsidy four times greater just through their exemption from tolls, even though the CO2 emissions of these trucks are scarcely lower than those of diesel-driven vehicles and far higher than emissions in intermodal transport.” 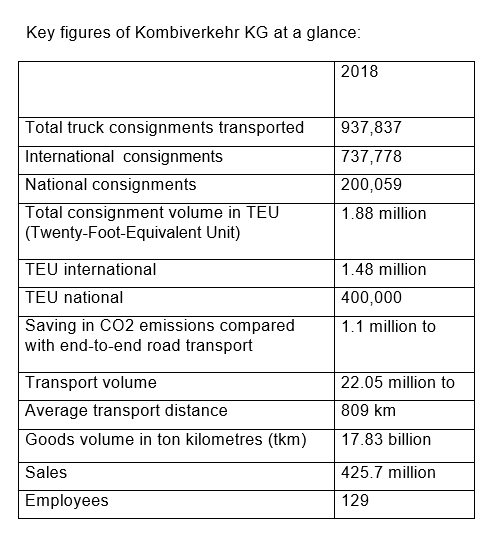 “Kombiverkehr would have been happy to run additional trains in 2018,” said Robert Breuhahn, managing director of the company, at the partners’ meeting. “But the rail operators were unable to meet the demand due to the shortage of locomotives and train drivers.”

The Train Monitor pilot project, running since last week, was one of the items presented by Armin Riedl, managing director of Kombiverkehr, at today’s meeting of partners of the company. Developed by Kombiverkehr, the system allows forwarders to track their consignments on rail in real time and find out information about the estimated time of pickup in the destination station.

To mark Kombiverkehr’s 50 years of existence, the company’s birthday train was presented
the day before the partners’ meeting in Frankfurt. It was loaded with the latest swap bodies,
containers and semitrailers from Kombiverkehr’s customers and hauled by a current and a
historic locomotive (series 139), both in special birthday livery. 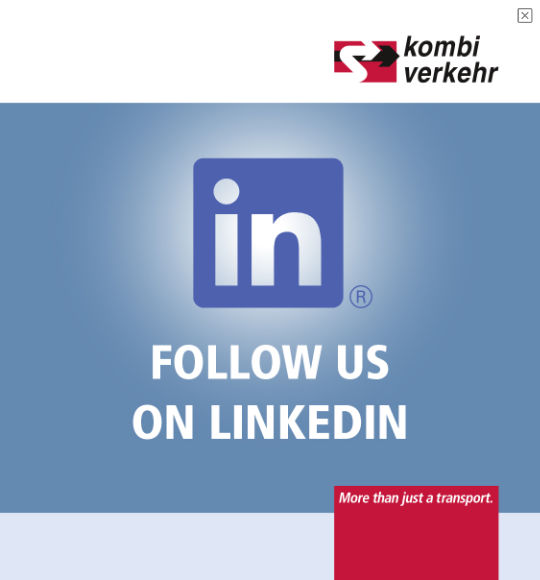